“Felicity really helped us all to understand the practical implications of the decisions we were making through a hands-on and engaging process.” – Deputy Head

Loose parts can be used very effectively to engage children and staff in school grounds design projects, both as a problem-solving tool and as a way to find out the key needs of the children. 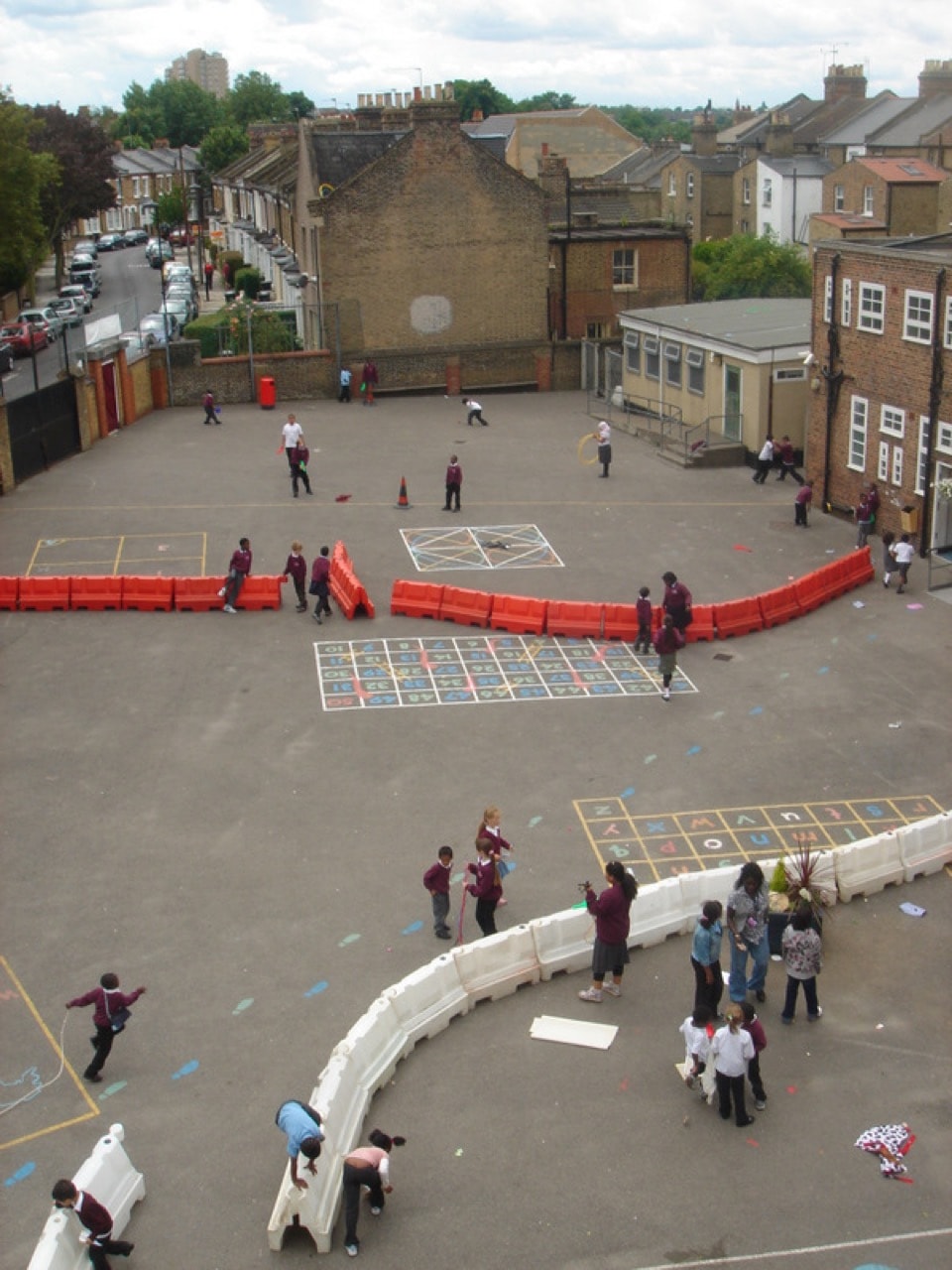 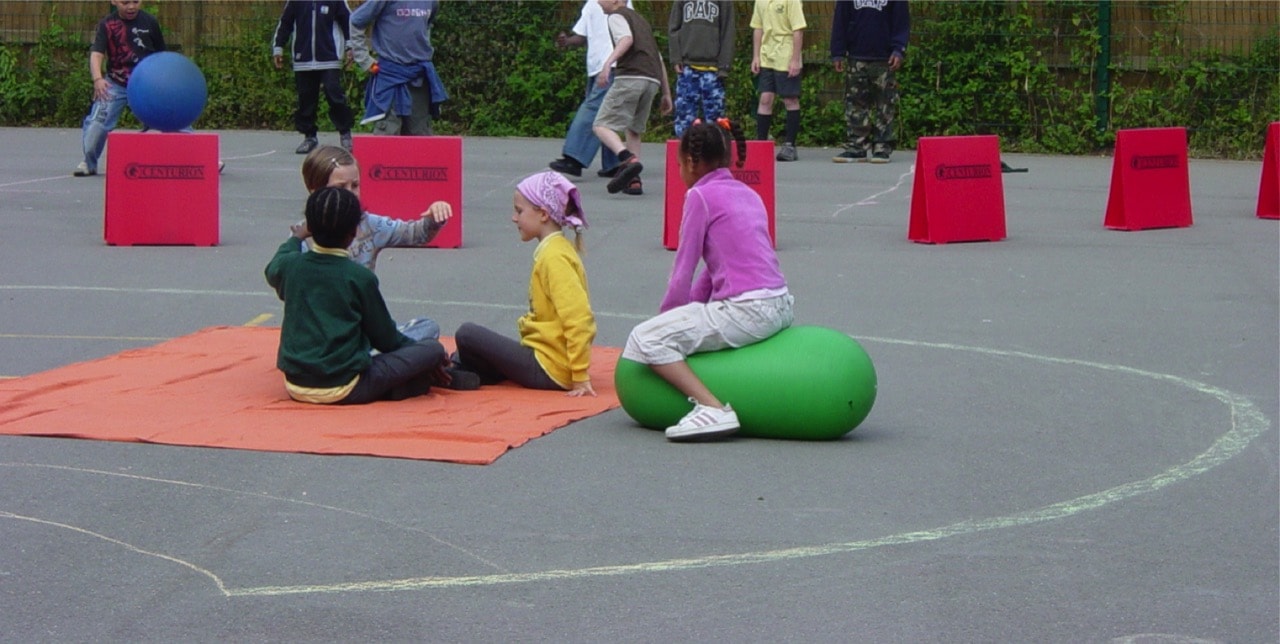 In one major re-design project at a primary school, loose parts were used for an ‘experimental playground’ day where all the children and staff were involved in a complete re-imagining of play and playtimes during morning break and lunchtime. The children were asked to use any of the resources to play. A wide range of non-specific loose parts were used (such as boxes, tubes, mobile frames, chairs, stage blocks, rugs, carpet tiles, tyres etc) as well as fabrics, props, books, games mats etc…Sufficient for the whole school at lunch break! 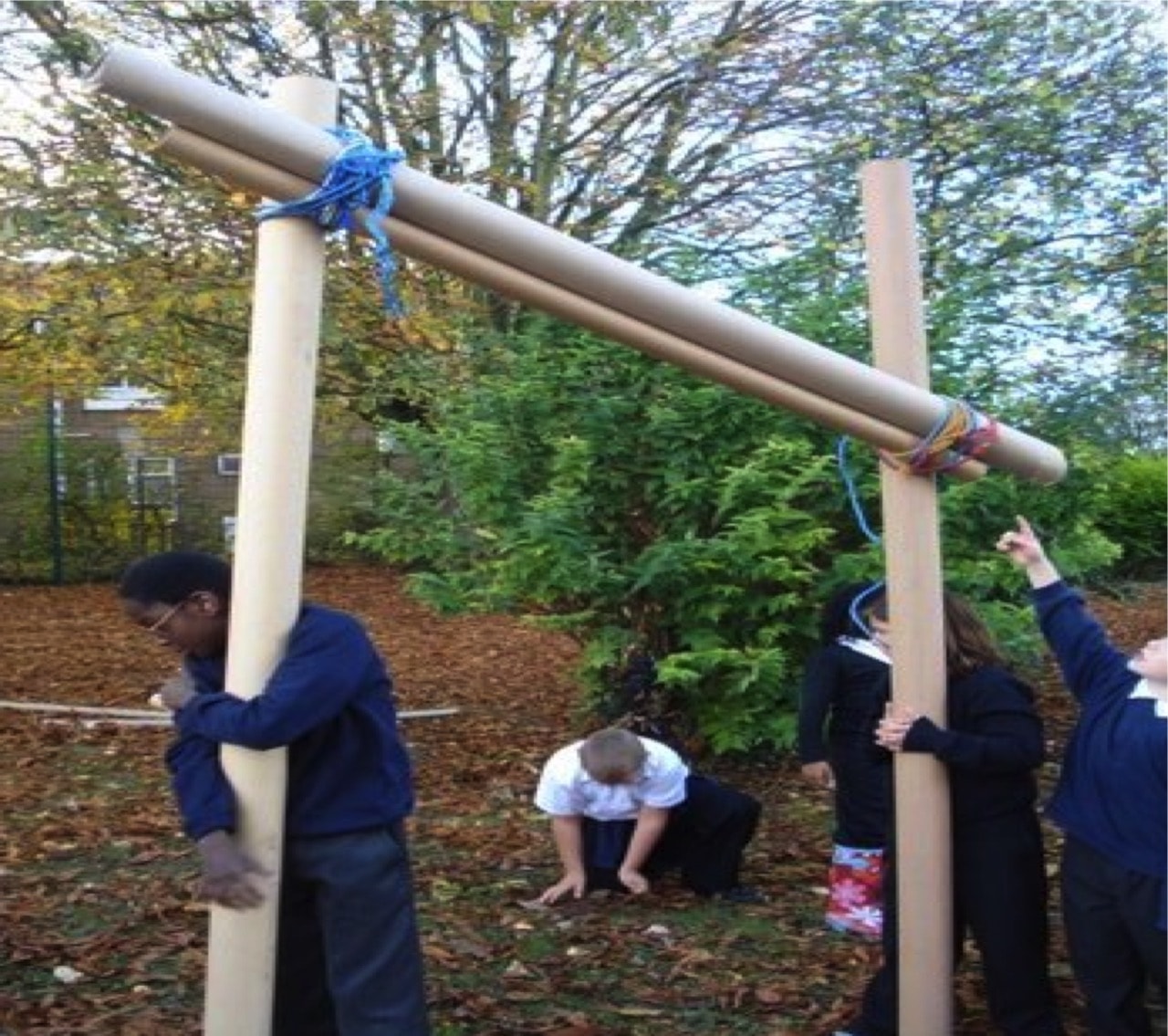 Loose parts used as construction resources to ‘problem solve” and design small-scale interventions. Here, carpet tubes were used to make a threshold archway to define the entrance to a quieter playground zone.

No other prompts were given, but careful observation and conversations with the children aimed to find out what sort of places they needed in this hitherto barren featureless tarmac play space. Territoriality was frequently observed, and the creation of quiet chat spots, or group gathering places (with associated imaginative play) along with physical challenges etc. From this and further engagement with children and staff the KPIs for the re-design were established, (within which regular loose parts play could also be provided of course) At a later date the principle zones of the design itself were also mapped out for a week (see photos) so the school could get a feel for the spaces created before committing to major changes. 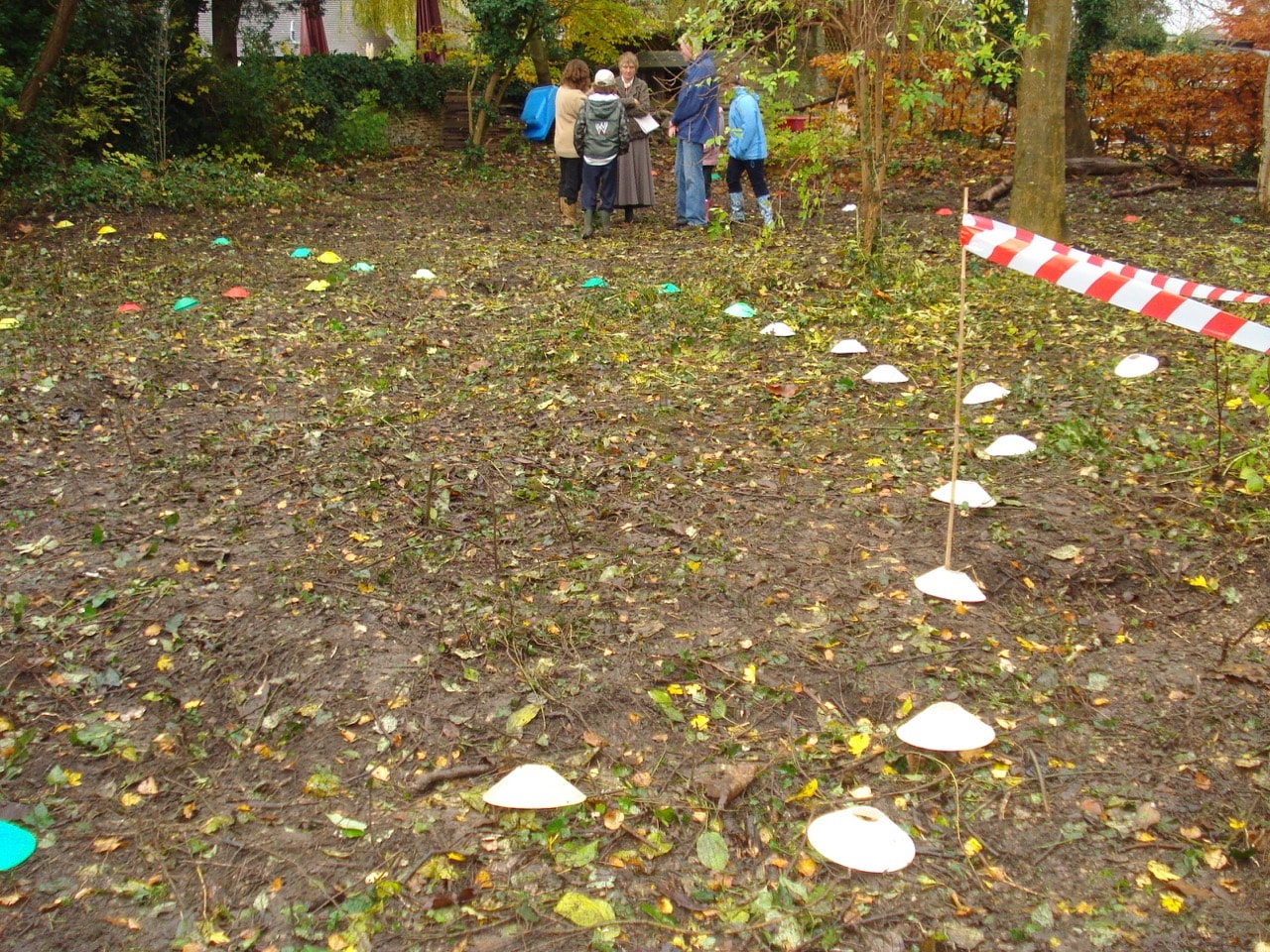 Using PE cones and hazard tape used to plan, imagine, discuss and make decisions about paths and new features in a woodland garden. 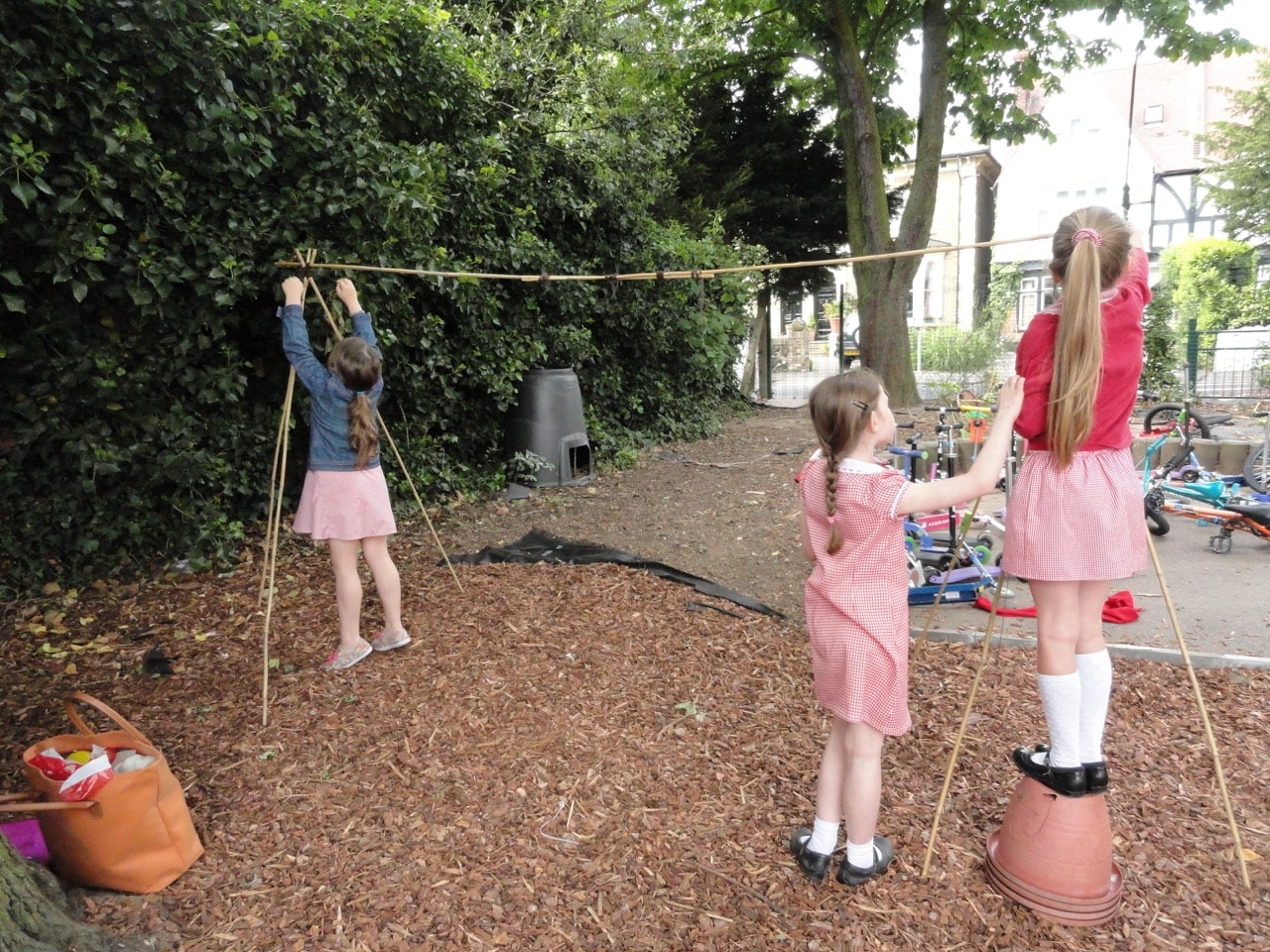 Planning a new play structure, how much space will it take up? How many children can play on it? Lots to think about, measure and discuss…

In smaller projects loose parts are also frequently used as ‘problem solving’ resources, where children experiment with ideas, and test solutions to issues they have identified in their playgrounds. For example, in one school a quiet area was anything but quiet! Children used it as a ‘had’ home base disrupting any chat or other social play that was going on there. Experimenting with loose parts led the children to the solution of creating some boundaries to the place, and a variety of ways to access the space that slowed children down and were also fun, (such as a stile). This is just one example of many. 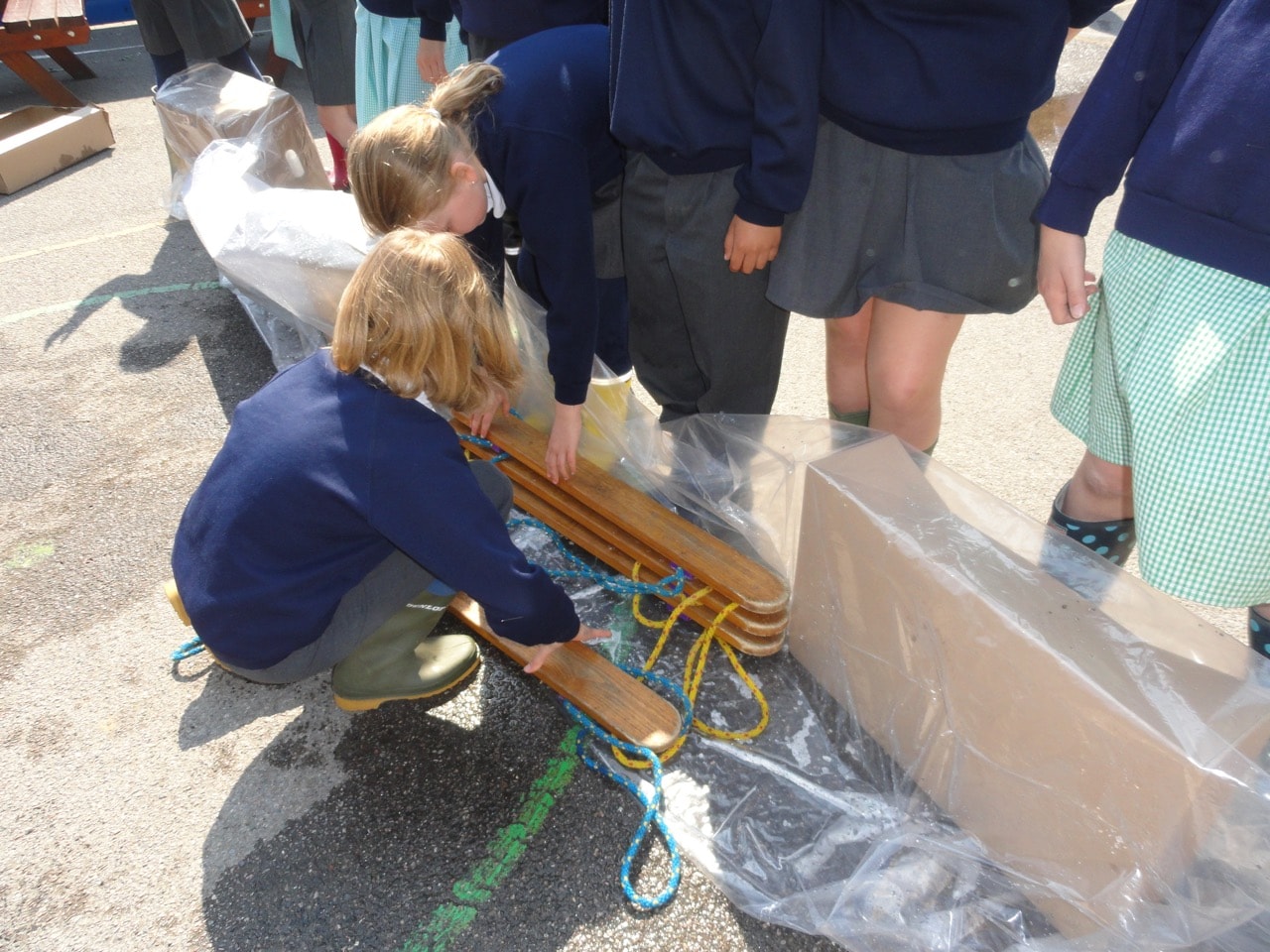 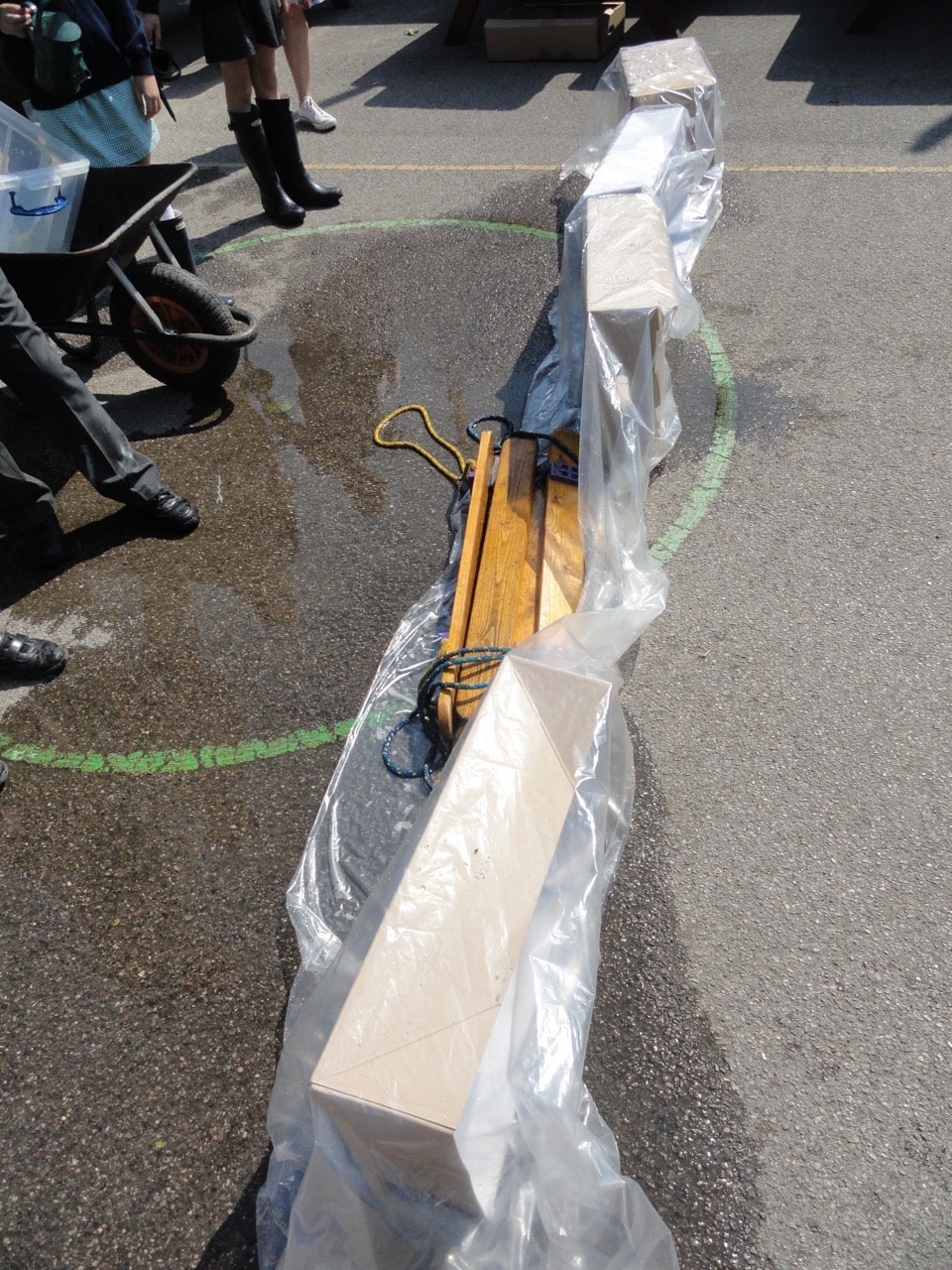 The problem here was water flooding into the school building, so the task was to experiment with ideas for how to prevent this. Much wet fun was had by all, lots of cooperation and team working took place, a bit of science was learned too! Result! Wet one side and dry on the other (almost)

“My main observation has been that Felicity uses open questions to encourage children to think for themselves to work answers out and each session is usually centred around a problem that the children have to solve. She is very flexible in her approach, plans sessions with staff and communicates extremely well with both teachers and pupils to develop and excellent working relationship.” Evaluation – Creative Partnerships

“I think the main thing has been that the children are doing so much problem solving. It has been an important step for them. Everything has to be looked at closely to see if it feasible in real terms. This is something that has been a learning curve not only for the children but us too.” Teacher – Barons Court

“Teachers and students look forward to working with Felicity and have found her extremely approachable, friendly and dynamic.” Evaluation – Creative Partnerships

To develop your outdoor learning and school grounds get in touch
with Felicity on 07968 771582 or email info@landscapesnaturally.co.uk

Send me your contact details if you would like to subscribe to my termly newsletter, and find out how you can get a free copy of my book “Naturally Inclusive – a new approach to design for play”

Felicity was asked by the school grounds charity Learning though Landscapes to write some advice for schools going back after lockdown.
This is practical guidance to use the outdoors in school grounds as learning spaces to maximise fresh air, active learning and access to the natural world for children and staff too. You can read the article here